Your Bizarre Adventure Wiki
Register
Don't have an account?
Sign In
Advertisement
in: Evolved Stands, Long-Ranged, Stands,
and 2 more

"It's truly, truly been… a long roundabout path."

Tusk Act 4 is a long ranged Stand used by Johnny Joestar in Part 7 of Jojo's Bizarre Adventure, Steel Ball Run. To evolve Tusk Act 3 into Tusk Act 4, you must use the Pelvis of the Saint's Corpse while also having Spin and Worthiness V.

Tusk Act 4 has a couple of niches when compared to its previous incarnations. Infinite Rotation is a key ability of Tusk Act 4 as it allows the user to walk within time stop for two to four seconds. All the while, Infinite Rotation bypasses attacks that redirect, with the most notable example being Love Train. The only way other Stands can damage its redirect abilities is via status effects, such as bleed or poison. Tusk Act 4 is also the only version of Tusk that has any melee capabilities, due to its barrage and barrage finisher. Wormhole Uppercut can also be used to engage to a target as a Tusk Act 4 can use barrage or barrage finisher, which Tusk Act 3 does not have.

However, Tusk Act 4 has a couple of flaws. Firstly, it is banned from Casual Steel Ball Run as it is classified as a Requiem Stand. Some players may even consider it inferior to Tusk (Act 3). This is mainly due to Act 3's shorter cooldowns, allowing for zoning potential which Tusk Act 4 lacks. Comparing to other Requiem Stands as well, Tusk Act 4 does not offer too much from it's previous counterpart and is borderline considered weak for a Requiem tier Stand as it only offers limited movement within paused time that regular time manipulation Stands would have.

Passive - Infinite Rotation: Allows the user to walk for 3-5 seconds in stopped time, as well as bypassing all abilities that can reflect damage.

LMB - Punch: This short move with a short cooldown deals 9 damage at max destructive power and can be combo'd 5 times, ultimately dealing 45 damage if all hit.

E - Stand Barrage: Tusk Act 4 comes in front of the user to release a flurry of punches. Each punch deals a maximum of 1.5 damage.

R - Barrage Finisher: A heavy punch which can break blocks and ragdolls opponents. Deals 18 damage. an "ORA" can be heard here

T - Nail Shots: Shoots 3 nails, each dealing 8 damage. These can be blocked.

Y - Golden Rectangle Nail: Shoots 1 nail, dealing 24 damage. This can not be blocked.

G - Arigato Gyro (Thank You, Gyro): Tusk throws a punch, dealing 18 damage. A long beatdown lasting 15 seconds ensues, dealing 0.2 damage each hit, then a chain of punches dealing 6.7, 13.3, 13.3; then into another beatdown dealing 0.3 damage per hit for 10 seconds. Tusk then finishes the beatdown with a punch dealing 13.3 damage, flinging the opponent. This move is perfect blockable. It's cooldown lasts 85 seconds.

H - Tea Time: The user drinks Tea, healing them by a maximum of 40.6. This is because in the manga, tea (especially chamomile,) speeds up the regrowth of Johnny's nails.

C - Wormhole Uppercut: Tusk and its user sink into the floor, coming back up to attack the nearest enemy. This deals 13.5 damage, then hits the user dealing 6.7 damage; then does a small barrage hitting 10 times dealing 1.5 damage, Tusk then finishes the short beatdown with 13.5 damage. This can be regular blocked.

X - Wormhole Nails: Tusk Act 4 uses wormholes to redirect nails that have recently been shot and missed, automatically aiming them back at a singular target. When upgraded, extra nail shots will be added to this ability, allowing you to use it without shooting other nails beforehand. You can use this ability at medium ranges by pressing X on a target while having your cursor hovered over them.

Z - Nail Glide: Glide with your nail for 7 seconds.

Destructive Power: Increases the damage output of all moves. 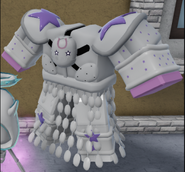 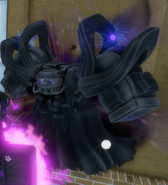