Your Bizarre Adventure Wiki
Register
Don't have an account?
Sign In
Advertisement
in: Stands, Humanoid, Yellow,
and 4 more

“The World's true power, as its name suggests, is to reign supreme over the entire world!”

Compared to its Alternate Universe counterpart, The World focuses on close range combat, having two barrages and a Stand Jump for extra mobility with some slight range capabilities with its knife throw. The World's main ability - to stop time - is a major advantage of The World as there are only a limited amount of stands that can move within stopped time.

However, Gold Experience Requiem can cancel out the Time Stop with its Return to Zero ability. Furthermore, Road Roller is a heavily punishable attack when used incorrectly, allowing to put the user in a bad position if it misses.

LMB - Punch: This short move with a short cooldown deals 8.9 damage at max destructive power and can be combo up to 5 times, ultimately dealing 44.5 damage if all hit.

R - Stand Barrage Finisher: The World releases a very powerful punch that is able to break through blocks and ragdoll your victims. (11, 17.7 at max Destructive Power.)

T - Throw Knives: The World throws a single knife in the direction of its user's cursor. At the final upgrade of this move, three knives are thrown. This move can be blocked, but only 4 times before the block is broken (at Max Sturdiness.). This stuns enemies. (5.1, 8.1 at max Destructive Power, you can use it without TW out but it won't have the destructive power upgrades.)

G - Road Roller: TW's user jumps high into the sky, bringing a steamroller down with them, slamming it down where they were previously standing. This move used to deal close to 70 damage. After the update on 1st July 2022, it now deals 0-200% of the opponent’s health depending on how health they have lost.This move bypass block and ragdolls opponents (13 on impact, 0.5 during barrage phase, and the final hit depends on how much health the victim has lost.) [You can avoid this move fairly easily even if you only have dash and not any mobility moves] also can't be parried and breaks block. This move can attack multiple players at once as long as they are under the steamroller.

Y - Kick Barrage: The World throws a flurry of kicks forth at his target which finishes with a strong kick that is very fast and powerful. This ability can be perfect blocked at the start, but if you're late it will be a guaranteed barrage. (1.5 barrage at the kicks, 11 damage at the last kick.)

X - Stand Jump: The World does a huge leap forward, allowing you to climb buildings, as well as run away. Launches you twice as far during Time Stop.

Z - Time Skip: The World quickly stops time and you teleport in the direction of your cursor. It can be used to scale buildings at ease, due to its short cool down and you cant use in TS.

H - Rage Mode: The user screams and enters a state in which their Stand emits a red effect. This gives a 20% damage boost to all moves and allows use of Time Stop. This also allows you to take less damage.

J - The World (Rage Mode): The user does a quick start-up animation and yells "Za Warudo! Toki Wo Tomare!" before stopping time for 5 seconds, allowing you to land attacks on your opponent while they cannot move. During Stopped Time, you are unable to run and your Rage Bar rapidly gets consumed. You and others with time stop resistance can also jump higher during this time. When attacking your opponent in stopped time, all projectiles stay in place until time resumes, and you can constantly punch and use knockback moves on your opponent without knocking them back. During this time your opponent cannot counter barrage, leaving you a free barrage. Note that stands with the Time Stop Resistance skill will be able to temporarily fight back, depending on how many times they have upgraded the resistance, and as written above, they will also get this jump boost, allowing them to be able to jump high, and consequently avoid your attacks in the time stop, or achieve a height where you are unable to use your M1 attacks)

Time Stop Resistance: 3 points, allows you to move in other people's stopped time for 3 seconds

Time Stop Mastery: Increases how long The World can stop time for.

Stand Jump Upgrade: Increases how high you can stand jump.

The World's 1st skin, The Waifu. 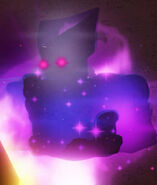 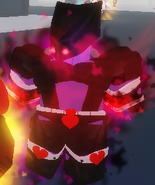 The World's 6th skin, The World's Greatest High. (This is not a limited skin)