Your Bizarre Adventure Wiki
Register
Don't have an account?
Sign In
Advertisement
in: Stands, Humanoid, White,
and 5 more

Josuke Higashikata! I, Okuyasu Nijimura, will make you disappear with my The Hand!

The Hand is a blue Stand with yellow eyes and black stripes. It has gold rings on it's arms and the yen sign on it's torso. The Hand's main ability is to erase things from existence, but it has other abilities as well, such as pulling things to Okuyasu, The Hand's user. In YBA, it can also use its erasures to accelerate. You have a 4% chance of getting it from an arrow.

The Hand can be a very annoying Stand if you're fighting it. Its erasures deal a ton of damage and remove a limb. The erasures also have a short cooldown.

Although, The Hand does have some flaws. The erasures are really its only source for damage. That is, unless you combine it with a spec.

The Hand’s main weaknesses are its kit in general. The Hand only has two main damage moves both of them being able to parried. The Erasure Pull can be considered useless by some people as the enemy can punish you if they parry an erasure that was thrown right after.

LMB - Punch: The Hand throws out a basic punch dealing 5.5 damage per hit, comboing for up to 27.5 damage per 5 hits.

E - Stand Barrage: The Hand unleashes a barrage of slow punches, dealing 0.9 damage per punch. This move has little to no end lag.

X - Erasure Pull: Erases the space between the user and the opponent, pulling them into The Hand's attack range. This move has an end lag of about half a second. Although this move does not deal damage, it stuns the opponent the same way if you were to use LMB on the opponent.

Z - Erasure Acceleration: The Hand erases the space in front of the user to leap forwards. This move does not deal damage.

Erasure: upgrades the damage on Erasure.

Erasure: 1 point, The Hand swipes its hand, erasing one of the opponent's limbs and dealing great damage.

Erase Pull: 4 points, The Hand swipes its hand in order to erase the space between the user and the opponent, pulling them closer.

Erasure Acceleration: 4 points, The Hand swipes its hand in order to erase the space in front of the user, propelling them forward. 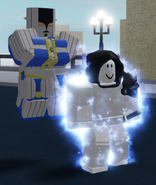 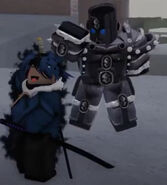 A Transparent Image of The Hand
Community content is available under CC-BY-SA unless otherwise noted.
Advertisement