Your Bizarre Adventure Wiki
Register
Don't have an account?
Sign In
Advertisement
in: Stands, Humanoid, Silver,
and 4 more

Silver Chariot is a close-ranged Stand based off The Chariot, a Tarot card. Silver Chariot is used by Jean Pierre Polnareff in Stardust Crusaders. The Stand also appears later on in the series in Golden Wind. At first glance, Silver Chariot appears to be similar to a medieval knight. Its pupils are blue and its irises are yellow. Silver Chariot has 2 rapiers (1 is used to attack and the other is for "Last Shot").

LMB: Chariot uses its rapier to hit its victim, dealing 6.7 damage. Max combo of 5. Deals a total of 33.5 damage if all hit.

RMB: Same as R, but is cancelable and weaker, dealing 9.3 damage. It is recommended to use it for breaking the opponent's block instead of R due to the very fast windup with armor off.

Z - Last Shot: Chariot launches its rapier, using it as a projectile and dealing good damage to the opponent. The projectile can ricochet off of walls dealing 12 damage on contact. This move redirects to the nearest player when it ricochets off of something. This also applies a slight stun and is good for starting combos or applying pressure if the opponent runs to pose.

H - Toggle Armor This toggles Chariot's armor. With Chariot's armor off, its barrage, LMB, and RMB is a lot faster and has less end-lag and startup. Unlike the anime/manga, it does not lower your defense.

T - Million Pricks: Strikes the opponent with a lot of low damage strikes dealing 0.7 damage each prick; in total, this deals 35 damage. This lasts for a long time, and the opponent cannot strike back during the attack, but is able to barrage. This move also renders counters ineffective, as the chain of cuts will continue even when the initial hit is countered. The strikes are blockable, but will still continue even when they are blocked.

Y - Cycle Slash: A defensive 360-degree slash that hits 6 times and deals 5.3 each hit. Has hyper-armor and can be upgraded to have increased reach. This move is blockable.

This stand is actually really good with Spin due to Million Pricks guaranteeing Multi Ball and Steel Ball.

This combo deals a boat load of damage, especially with Golden Spin charged, dealing about 100 damage. (These combos are the same though) 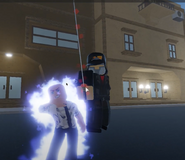