Your Bizarre Adventure Wiki
Register
Don't have an account?
Sign In
Advertisement
in: Characters, Stands, Humanoid,
and 4 more

Purple Haze is the stand used by Pannacotta Fugo, in Part 5 of JoJo's Bizarre Adventure, Golden Wind. It is obtainable from using an arrow with a 4% chance. This stand gets its damage off of others through poison damage, which can be upgraded to extremely poisonous levels. The poison damage cannot stack, but can be stacked with other effects such as Bleed, Burn and Freeze.

E - Stand Barrage: Purple Haze screams and unleashes a barrage of punches, each dealing 1 damage (1.3 damage when in Rage Mode.)

R - Barrage Finisher: Purple Haze unleashes a powerful blow that knocks down the target and deals 12.5 damage (15.6 when in Rage Mode.)

T - Bulb Breaker Punch: Purple Haze does a quick punch, if it successfully hits anything it will release a virus, creating a large cloud of toxic air damaging any in the vicinity and dealing serious poison damage. The punch can activate on both player and non player structures. For example, using T on a wall will activate the cloud.

Y - Bulb Breaker Ground Punch: Purple Haze punches the ground and a maximum of 4 bulbs break, creating a large area covered in the deadly virus and also dealing damage to the user.

Z - Bulb Throw: Purple Haze throws a maximum of 3 bulbs at once which deal 6.3 damage each, when the bulbs break they release a cloud of the virus. This goes further than Bulb Breaker Ground Punch and does more damage, with a bigger cloud of virus. This move also deals damage to the user.

H - Rage Mode: Purple Haze enters rage mode, giving its torso a fire effect. This gives a 30% damage buff and a 20% defense buff, as well as making the user immune to the virus. This can only be activated when the rage bar is full. This stand charges rage the fastest out of all other Rage Bar stand users. 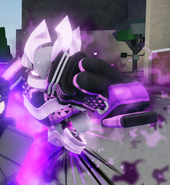