Your Bizarre Adventure Wiki
Register
Don't have an account?
Sign In
Advertisement
in: Stands, Non-Humanoid, Yellow,
and 2 more

Stand takes the form of a Key

"It seems we're inside the turtle."

Mr. President is a non-humanoid stand from JoJo's Bizarre Adventure Part 5: Golden Wind. It is an object which takes the form of a key. It has its own pocket dimension inside of it, which serves as the gang's safe room throughout Golden Wind. It is the stand of the turtle "Coco Jumbo". There is a 10.5% chance you will obtain this stand with an arrow, making it one of the few common stand that exist within the game.

Overall, the Stand is mainly used to troll or within Steel Ball Run due to its limited combat capabilities, requiring a Speciality for serious combat scenarios or for the main story.

E - Kidnap: Swiping anyone in front of it, victims hit are sent into Mr. President's room. Kidnap's duration depends on how much it is upgraded. Deals 22.5 damage when you kidnap them using the ability. Does not work on enemy NPCs.

Z - Empty Room: Makes all players within Mr. President leave the room including yourself.

H - Enter Room: Allows you to enter Mr. President. Great for hiding or preventing others from healing while in the room. If used in SBR, you will only be able to remain in the room for one second before you are dragged out.

Y - Restock Supplies: Heals everybody in the room for 33 health.

G - Turtle Form: You turn into a turtle and can move around at slower than average walking speed. Damage taken will be reduced by 50%. You are forced to move at the slow walking speed. Being in this state for too long (around 3 minutes) will cause you to revert to human.

X - Shell Form: You go into your shell and hide, reducing 75% damage taken. Your walking speed is decreased more, as you appear to hardly even move. Being in this state for too long (around 1 minute) will cause you to revert to human. This move is good for surviving Beatdowns or Time Stop.

Kidnapping I to V - Increases time you can trap a player in Coco Jumbo for - Costs 2, 2, 2, 3, and 4 skill points for each level respectively.(at max gives the option to exit at about 17 to 19 seconds if you want to inf trap) 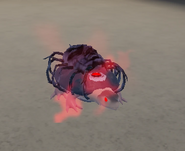