Your Bizarre Adventure Wiki
Register
Don't have an account?
Sign In
Advertisement
in: Stands, Evolved Stands, Part 6,
and 3 more

The Way to Heaven (YBA Name)

Made in Heaven (Queen Song)

The upper half appears to be riding the horse. The eyes have been replaced with a speedometer, and there are speedometers all over its body.

“ You might think that knowing the ill fortunes of the future is despair but it's the opposite! Even if you knew you were going to die tomorrow, it is that 'resolution' that makes one happy! One's 'resolution' eradicates 'despair'! Humanity will change! This is what is strived for! This is Made in Heaven! ”

Made in Heaven is the Stand of Enrico Pucci, the main antagonist of JoJo's Bizarre Adventure Part 6: Stone Ocean and the final evolution in Whitesnake's line; which concludes The Heaven's Plan.

Made in Heaven is an extremely powerful stand if used correctly. Players can loop maxed Double Accel and Time Acceleration to make sure that their stand is never slow, meaning that you can generally get free combos, then run away easily. It is often criticized because of the low damage of its moves, but the amount of damage you do is irrelevant if you can hit your opponent, but your opponent can't hit you.

Because of its speed, it is extremely difficult to counter this stand. Although every move in MiH's moveset [excluding Universal Reset] isn't the best damage dealer in the game, players still have the stand's speed to deal with, since with Double Accel MiH can deliver M1's and other moves at an alarming rate. For this reason, it is highly recommended to use a Time Stop stand, such as Star Platinum: The World or The World Over Heaven to counter this stands immense speed and deal as much damage in Time Stop as possible. However, even this weakness can be countered with Made in Heaven's Time Acceleration, which shortens and weakens all time related abilities. These factors make Made In Heaven one of the best stands in the game by far.

Step 2: Be at least Prestige 1 to talk to Enrico Pucci, you need level 40+ to accept his quest.

Step 5: Once you completed the quests you will get Green Baby. Use the Green Baby on Whitesnake. You should have Worthiness V, otherwise, you might turn into stone. If it worked, you should get C-Moon.

Step 6: Talk to Enrico Pucci again, this time you don't need a DIO's diary. For the rest of the quests, whenever you talk to Enrico, make sure to have C-Moon equipped, or he'll just give you the Green Baby mission.

Step 7: He will tell you to defeat Heaven Ascension DIO, and get his bone, DIO's bone. To get into his dimension you need the 4 corpse parts, the Pelvis, Left Arm, Ribcage, and Heart of the Saint's Corpse. You can get them by winning SBR matches or getting them in arcade, very rarely. After you defeat Heaven Ascension DIO, there is only a 16% chance of getting DIO's bone.

Step 8: Once you defeat Heaven Ascension DIO and obtain his bone, talk to Enrico Pucci again. He'll say to defeat Jotaro Kujo, who is to the right in the water near the Enrico NPC, and obtain his Disc (Jotaro's Disc). He's the strongest boss in YBA, so you might need some help. After you defeat Jotaro Kujo, there is only a 16% chance of getting Jotaro's Disc. Once you get the Disc, talk to Enrico Pucci again. He'll tell you to go to the Tallest Peak and unsummon and resummon your stand, C-Moon. The mountain is on a path close to the normal DIO NPC, who you can fight once you reach level 30. If you still don't know where it is, search for it or ask a player for help.

Step 9: Once you're on the top of the Tallest Peak, unsummon and resummon your stand, and Made in Heaven should be yours! You'll get an Enrico Pucci hair, unless you have your cosmetic inventory full.

Passive: All your dashes become instant teleports when Double Acceleration is active.

LMB - Punch: A simple punch dealing 6.3 damage. The speed of your punches are doubled during Double Acceleration.

R - Stand Barrage Finisher: Heavy Punch doing 12.6 damage and ragdolling the enemy, during Double acceleration this move comes out much faster. (15.6 with hamon)

T - Knife Throw: MIH throws 3 knives, each doing 7.5 damage with small stun and a total of 22.5 damage. This move has an extremely quick cooldown at max upgrade. (Can be blocked and doesn't break block.) [10.1 each with hamon]

Y - Speed Slice: MIH and the user slice the opponent's neck at high speed, dealing 10 damage and a bleed effect as well as ragdolling. (Breaks Block, cannot be Perfect Blocked) [12.5 with hamon]

G - Heaven's Judgement: MIH and the user zoom forward, to then hit the opponent multiple times at lightspeed. This move deals multiple ticks of 5.8 damage per hit, then finally hits the opponent with a punch that deals approximately 12 damage. This attack deals around 52.6 damage in total. and, like Cream's Dark Space, can be blocked the whole duration of the move Blockable but cant parry . (65.75 with hamon)

X - Infinite Speed: MIH and the user travel at lightspeed behind the target and punches them, dealing 25 damage and stun. This move is somewhat like skull crusher. Can be parried, if not parried, bypasses block and stuns. (31.25 with hamon)

H - Time Acceleration: MIH and the user accelerate time, causing day and night to go by very fast. When it starts, all of the user's stand moves CD except Double Acceleration will go away, except for if there was a Universe Reset before you. During this, all time related moves are reduced, all of the user's stand moves CD except Double Acceleration are reduced at double the normal rate, and the user has over triple the walk speed. Unlike Double Accel, your attack and M1 speed will not increase. Also during this time, all players in a 100 stud radius will be trapped in an invisible barrier along with the user. (This move is cancellable and all music during the acceleration becomes several times faster.)

H - Time Acceleration to Universe Reset: This is not an actual move, it is something that can be upgraded, which will happen shortly after the time acceleration finishes. All players that were trapped in the invisible barrier will not be able to move, as their screen becomes more and more white. If you were barraging though, you could still continue doing so. Then there will be a lag-causing moment where everyone including NPCs will be sent into outer space and into a new universe. After everyone is sent into the new universe, the user will heal around 40 health points, and they will have a new identity, aka turning into another player in ROBLOX. Their name will stay the same, except it will say (Alternate Universe) after the name. Every other player also assumes a new identity, and lose 1 limb. If they lose an arm they will take more damage, if they lose a leg they won't be able to run. This can be upgraded so the effects of this Temporary Rename and loss of limbs lasts longer.

Getting Made in Heaven/The World Over Heaven

Made in Heaven skill tree 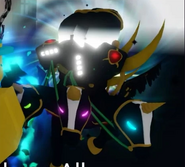 MIH's first skin, One Above All 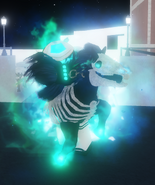 A transparent image of Made In Heaven.