Your Bizarre Adventure Wiki
Register
Don't have an account?
Sign In
Advertisement
in: Stands, Close-Ranged, Part 5,
and 3 more

You from a few seconds from the past witnessed yourself in the future. This is my King Crimson's ability. I erased time and leapt past it!"

King Crimson is the Stand of Diavolo, the main antagonist of JJBA Part 5: Vento Aureo. King Crimson is a melee-based short-ranged Stand that has a 2.5% chance of getting obtained from a Mysterious Arrow, making it one of the rarer Stands in-game. This Stand has been renamed Scarlet King, in order to avoid copyright issues.

King Crimson's main advantage is its damage output. It has access to Impale, which induces bleed, and is an Execute move. It also has Epitaph to teleport behind whoever hits the user (or guarantees a chop if you get the Chop Passive, though not recommended as it ragdolls and doesn't allow combos.) - this can shut down piloting Stands, though Epitaph has a fairly short range limit. King Crimson can also use Time Skip to engage or disengage from combat, and traverse in SBR. It's key ability, Time Erase, makes the user immune to damage and invisible for around 9 seconds.

Despite all this, King Crimson's main flaw is that Epitaph and Time Erasure can be baited out, and more skilled players can respond to Time Erase if it is used offensively. When on cooldown, King Crimson lacks any major abilities to help it. Gold Experience Requiem can also cancel out Time Erase via Return to Zero.

T - Epitaph: The user's screen and King Crimson's head glow red. If you are hit during this time, you will negate the incoming damage and teleport behind the attacker. Keep in mind that the attacker will receive little to no stun. (Counter)

T (If upgrade is unlocked) - Chop Passive: If the user is hit by an opponent while Epitaph is active and the chop passive is unlocked in the skill tree, the user will teleport behind them and deliver a chop, dealing damage and inflicting bleed to the attacker. The attacker will also get ragdolled and get their stand crashed.

Y - Chop: King Crimson delivers a heavy chop which deals 16.9 damage at max Destructive Power, applying bleed and stuns the opponent for approximately a second and a half, making it a great combo starter/extender. Cannot be canceled upon being interrupted during startup sequence unless ragdolled.

G - Impale: King Crimson thrusts its arm forward, donutting any target in front of the user, dealing damage and applying bleed to the victim. Impale has a large hitbox, and can be canceled on startup, can be parried but bypasses block. The victim of Impale will lie on the ground for around 3 seconds before getting up with iFrames. This move is an Execute move.

Z (hold) - Time Erase: King Crimson and its user erase time with it being unable to be cancelled unless a Golden Experience Requiem uses their "Return to Zero" Move.

X - Time Skip: Teleports the user in the direction of their cursor. It has a similar range to Star Platinum and The World's Time Skip.

Immediately use Impale after epitaph, not after teleporting behind the attacker.

Immediately use Impale after epitaph, not after teleporting behind the attacker. 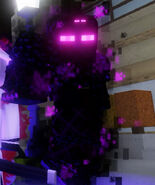 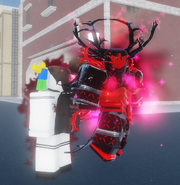 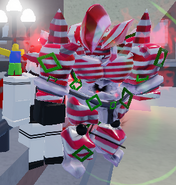