Your Bizarre Adventure Wiki
Register
Don't have an account?
Sign In
Advertisement
in: Stands, Evolved Stands, Close-Ranged,
and 6 more

appearance, along with features commonly found on cats; pink

Sheer Heart Attack
Another One Bites the Dust

"Go ahead, corner me all you want! When I reach my absolute limit, I'll just activate Bites the Dust!"

Killer Queen: Bites the Dust, is a Stand obtained by using a Requiem Arrow on Killer Queen. This stand belonged to Yoshikage Kira, the main antagonist of JJBA Part 4, Diamond is Unbreakable. He obtained the ability "Bites the Dust" after being stabbed by The Arrow the second time. The ability gave him access to a 3rd bomb which re-winded time by an hour every time the victim exposed his identity and killed all those who learned it.

Killer Queen: Bites the Dust is a humanoid cat that emits a purple-black aura. It features a crack on its face from the damage it took in its final battle with Josuke's Crazy Diamond. It also features Stray Cat, a separate stand that controls air, stowed away in its stomach chamber. Instead of red eyes, it has glowing pink eyes with white pupils.

This Stand is most commonly paired with Hamon thanks to it's easy to use nature and damage increase. Boxing and Vampirism do make their appearances from time to time due to how bulky Boxing makes you, and Vampirism's Vaporization Freeze and Space Ripper Stingy Eyes.

Like it's pre-evolution, Killer Queen: Bites The Dust possesses a unique, offensive niche. All of it's unique abilities are unblockable while ragdolling and most Stand Crash the opponent. Sheer Heart Attack is an indestructible summon that will relentlessly pursue it's target, so long as no one else gets in the way.

However, while the Stand has many unique qualities, it has multiple flaws to compensate for it. Unlike other Stands, Killer Queen: Bites The Dust's attacks are very vulnerable to invincibility frames thanks to the fact that they need to loop in order to play the game. This is most apparent with Sheer Heart Attack, who is commonly Time Skipped or stand jumped away from, resulting in no damage. The same applies for counters and damage redirection. All of it's attacks are cancellable, making it difficult to utilized in close combat. Bites The Dust looks good on paper, but it has an overly long startup to the point where dying while using it is common. It's immense cooldown prevents it from being of much use in any regard, even if your opponent doesn't walk out of it. Speaking of which, for a move with one of the longest cooldowns in the game, Bites The Dust does not deal enough damage nor heal enough HP to warrant it's cooldown (worse yet, it can be dealt with by Return to Zero, by far having the longest cooldown of any move affected by it). Killer Queen: Bites The Dust has one of the costliest skill trees in the game, only second to The World: Over Heaven, hitting 65 skill points in all.

Passive - No One Will Know My Identity! - When Killer Queen's final blow to an opponent is an explosion, they will be completely incinerated and vaporized to an atomic level, leaving no trace of their corpse.

RMB- Heavy Punch: Killer Queen does a punch dealing 10 damage, along with breaking guards and knocking back.

T - Plant Bomb: Killer Queen plants a bomb in front on the surface in front of the user, including players and the ground. An icon will appear where the bomb is placed, and the bomb persists until detonated. Deals 7.3 damage on contact with player, and 31.9 when detonated.

H - Bomb Leap: Plants a bomb on the ground, sending you flying upwards and forwards and dealing 21.3 damage to anyone nearby. When cancelled by an attack, this move will still deal damage, but the user will not be launched.

Z - Coin Bomb: Killer Queen tosses a singular coin into the air a short distance in front of it's user. This coin explodes on contact or on manual detonation, dealing 29.3 Damage. Getting the "Coin Collector" upgrades will reduce the cooldown of this attack.

X - Scattered Coin Bombs: The user throws multiple coins which act almost as a barrage. These explode mid-air and damage people within range, dealing 3.7 for each that hits.

G - Stray Cat Bubble Bomb: Stray Cat shoots a bubble acting as a bomb forward, dealing 31.9 damage upon contact or manual detonation. This ability phases through all objects, such as buildings or props.

U - Bites the Dust: Killer Queen and it´s user will initiate a pose for about 4 seconds. After an initial 2 seconds, the user becomes invulnerable and everybody that's in close proximity will be frozen. The user then activates Bites the Dust, dealing 77.7 damage and rewinding time to 20 seconds. This has no upgrades and will revert anyone who was exploded back into the position they were in 20 seconds ago, along with the user, who additionally restores 20% of their max health. This move can be used in hitstun, such as barrages. Bites the Dust will not activate when nobody is in the explosion's range.

Note: All damage numbers listed are assuming the player has Destructive Power maxed.

If you want to use BTD, you have to know how to Bomb Loop. Without it, you might as well be fighting standless. It's difficult to teach Bomb Loops, as they're more like something you feel. Once you get used to the stand, it will become easier and easier to keep your opponents locked down. I will divide this section into the two most aspects of Bomb Looping.

Which Bomb When: Knowing when to use what bomb is necessary for an effective loop. Again, this comes in time, but a general cycle should look like Primary -> Bubble -> Coin-> Primary -> Bubble -> SHA/Scattered -> etc. Watching your cooldowns is mandatory, especially for Primary and Bubble. Usually you will only use Coin Bomb once a combo, because of the cooldown. This is not a set in stone combo, the beauty of Killer Queen is that it gives you all the tools, and you decide what to make of it. If coin is on cooldown, try a SHA barrage. Coin Barrages are useful if you can accurately predict where the opponent will be when they lose invincibility. Coin Bomb is the hardest to hit, as the invincibility can be weird at times, but you'll get the hang of it soon enough. Even with consistent timing, there is still the chance they just walk right on through.

Prediction: There was a time where Killer Queen was allowed to choose the direction the bombs launched their opponent, but this is long gone. This naturally made looping much easier, but that doesn't make it impossible now. Predicting where your opponent will land is a difficult task, but very rewarding. Once you get very good at this, you can even shoot the Stray Cat Bubble Bomb in the direction you estimate they will land, and set up your loop with downtime to catch up. 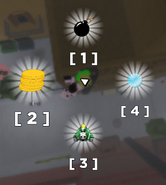 The Activation and colorful cutscene during the usage of Bites the Dust. Notice how players must be nearby for its activation to work. 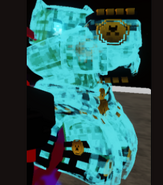