Your Bizarre Adventure Wiki
Register
Don't have an account?
Sign In
Advertisement
in: Characters, Stands, Humanoid,
and 3 more

"Yes, you may drive my Hierophant Green mad...mad from joy, that is. For you see, my Stand loves nothing more...than to rip things to shreds!"

Hierophant Green is the Stand of Noriaki Kakyoin, one of the Stardust Crusaders within JoJo's Bizarre Adventure Part 3. Hierophant Green is a long-ranged Stand. It is best known for its ability to use the Emerald Splash and remains one of the most recognizable Stands in the series. You can get this Stand from a Mysterious Arrow with a 4% chance to obtain it. This Stand has been renamed "Tentacle Green" in-game in order to avoid copyright issues.

This Stand is commonly paired with Boxing for the consistent defense boost or Hamon thanks to its ease of use, damage boost and, like Boxing, damage reduction. It could also be paired with Spin for its stuns, though Spin being a very unreliable spec is likely not viable. It is also commonly paired with Vampirism with the amount of stuns, healing and range it has when paired with the spec.

On paper, Hierophant Green is a weak Stand. Its base power and speed are among the worst in the game and its moveset is incredibly small, consisting of a barren three attacks, not including Pilot. However, Hierophant Green's moves are powerful enough to give it serious tournament play, despite the fact that it isn't bluntly overpowered.

Emerald Splash is Hierophant Green's most consistent and it deals 3 damage. It breaks block, can be charged to allow the player to properly aim and has infinite range, though is best used up close. Emerald Barrier is an invisible hitbox where the user can stand in it without consequence, and if any one player touches the barrier, they will be stunned as they take damage. Marionette Control prevents the opponent from moving, in addition to blinding them. It's best used when the opponent is in the Emerald Barrier, when they are stunned by the move. Pilot is the last of Hierophant Green's attacks and is where players will be spending the most time using it thanks to its long ranged, versatile Pilot. Finally, Hierophant Green is a low cost Stand, usually leaving the player with 30+ Skill Points to put into either their character or their specialty of choice.

Hierophant Green is not without its flaws, however. As stated before, Hierophant Green is a slow, weak Stand, meaning that it's M1s and barrage are almost useless offensively. In Pilot, if it is ragdolled, its attacks will be cancelled (a common reality when you realize Emerald Splash has small moments where stun doesn't apply), meaning that it relies on long combos and Emerald Splash chip damage to get things done. Finally, outside of small moments of Emerald Barrier stun, Hierophant Green is almost useless in the face of Time Stop.

To sum it up, Hierophant Green is a defensive Stand that requires a slightly adept hand to get the most out of. Its low cost, Pilot capabilities and chipping ability give it a genuine niche, but its flaws hold it back from being a truly dominant Stand.

T - Marionette Control: Hierophant Green throws a heavy punch, attaching its tentacles to the opponent. You can still attack while your strings are attached to the opponent. When your tentacles are attached, the target can't attack nor move and is forced to follow you. NPC's however, are forced to stay in place and do nothing, not move or attack. As of Version 1.0, victims can not have their stands forced away while under control.

Y - Emerald Splash: Hierophant Green charges a barrage of emerald projectiles to fire at opponents, dealing 3 damage per hit. This move has an 8-second cooldown and cannot be blocked. The button can be held down, but this does not change the move. It's basically a ranged barrage but it breaks block, and does not take up a barrage cooldown. When the attack ends, there is a great amount of endlag. If the user is knocked down at all, Emerald Splash will be cancelled.

H - Pilot: Allows you to manually control Hierophant Green's position. Unlike most other piloted Stands, Hierophant Green can fly around freely while being piloted, and, as opposed to Aerosmith, is not unsummoned when colliding with terrain.

Z - Emerald Barrier: Hierophant Green places a large amount of its tentacles around a medium area to stun and shoot 1.5 damage emeralds at those who touch them. When the barrier is not touched, it remains invisible, however when touched is shown to everyone. This move also works in Time Stop being a reliable counter to TS stands, though the projectiles only move at the Time Stop's end.

Note: all of these combos require Hamon charged before the combo starts.

Hierophant Black, Based on the Death 13 fight 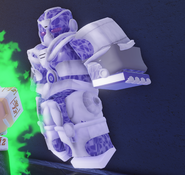 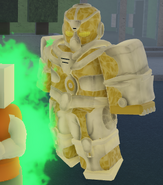 Hierophant Yellow, Based on the Tower of gray fight. 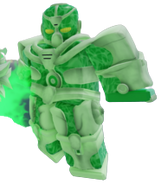 A transparent image of HG.