Hamon is noted for dealing more damage to Vampires, as the energy produced from Hamon breathing is the same as the Sun's rays and is the opposite of the energy that Undead have.

To obtain the Hamon Speciality, you must go to the mountains where Doppio is, then walk to the left side of the Mountains. Then, make your way to the top left corner of the cliffs at the Naples Train Station area and drop down to the platform where Jonathan Joestar is. Hamon's skill tree gives a 25% increase in damage and a 30% increase in your defense when charged, making it better for high damage Stands. It costs $15,000 and you must have a Zeppeli's Headband, as well as being level 10.

G - Hamon Charge: Charges the user's Hamon meter. Once the meter is full, there will be a slight cooldown for charging again. When the Hamon bar reaches it's fullest level, the user will brightly blink yellow, and will stay glowing yellow until the Hamon bar is empty.

V - Scarlet Overdrive: A heavy punch that sets the victim on fire for a bit. This move cannot be perfect blocked. This move deals 21.3 damage without the burn damage.

B - Sunlight Yellow Overdrive: A slow barrage that deals massive damage compared to the stand barrage and makes for a good attack when used in self-defense. This move deals 1.9 damage per punch and 2.6 to Vampires, This can go on until your hamon runs out which means theoretically if hamon's charge did not run out, you could do an infinite barrage.

C - Zoom Punch: Extends the user's fist to reach their target. It pulls your enemies closer, dealing good damage and slowing the enemy for a short time period. This move deals 21.9 damage, and stuns the enemy. This move has high endlag.

Hamon Duration: Affects how long your Hamon meter lasts for.

Hamon Punch: 2 points, buffs overall damage when Hamon meter is charged by 25% (10% for healing moves like Crazy Diamond's heals), does 60% more damage against the Undead.

Hamon Charge: Allows the user to fill up their Hamon meter much faster.

An image of Zepellin's Headband 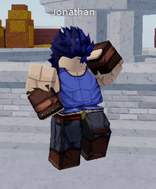