Your Bizarre Adventure Wiki
Register
Don't have an account?
Sign In
Advertisement
in: Stands, Close-Ranged, Part 5,
and 4 more

Humanoid stand with a gold-like color

"You will never arrive at the reality that will occur! None who stand before me shall ever do so, no matter what abilities they may wield!"

GER, in-game, has a couple of niches. It is one of five stands that can heal other players (the other four Stands being Gold Experience, The World Over Heaven, Mr. President and Crazy Diamond.) It also serves as a support stand within Steel Ball Run, while being able to do increased damage with its Awakening ability, which can also stack with Hamon Punch from the Hamon skill tree. This increases the Stand's damage to that that nearly rivals King Crimson Requiem and D4C: Love Train.

The main ability of GER however, is the Return to Zero ability. This negates various things such as Time Stop or Time Erasure, being able to avoid any potential combos. It also works to unequip the stands of people nearby, which can be extremely dangerous if used properly. Even if Return to Zero is under cooldown, GER can passively move within paused time for around three seconds.

Gold Experience Requiem was considered by many to be one of the best Stands in-game. Every move is offensive, even the healing is powerful, with its self-healing and others. Its only real weakness is its damage, which can be removed as a flaw with Awakening which can also stack with Hamon Punch from the Hamon skill tree. This has since changed due to scorpions from life beam (GER's main source for a lot of damage) having a lot more endlag, resulting in players not being able to immobilize opponents with barrage [or any one of a myriad of other moves] quick enough.

E - Stand Barrage: Gold Experience Requiem sends out a flurry of fast punches that deals 1.2 points of damage per hit (1.8 with awakening, 1.5 with Hamon, 2.3 with both).

T - Self Distribution: GER heals the user for 49.5 health (54.5 with Hamon, Unaffected by awakening).

Y - Life Distribution: GER heals 49.5 health to others (54.5 with Hamon, Unaffected by awakening).

U - GER Awakening: When activated, this ability boosts your movement speed (you also hover instead of walk), and damage. You also gain 20% HP back. When you kill someone in this mode, they are put in the Infinite Death Loop Cutscene. (3 mins, 50 second cool-down.) You cannot be stand-crashed in this mode.

J - Return To Zero: Using this move, GER can cancel out any time-related move that is in effect with the user being close, and can also be used (while not being attacked) to remove nearby Stand users' stands for a bit of time, as well as gaining only a short amount of I-frames when used. When activated during time-related moves, the victim is sent into a cutscene, unable to do anything, with GER telling them "You will never reach the truth." It disables Stands and prevents action, leaving your opponent defenseless, and since the user does not enter the cutscene while everyone else does, they can heavily punish those who fell in it. The following moves that can be canceled with Return To Zero are: Time Stop, Time Erase, Dimensional Dip, and Dimension Hop. It cannot stop Made in Heaven's Time Acceleration.

H - Tree Summon: GER punches the ground, creating a tree which sends the user upwards and damages anybody nearby for 12 damage(18 with awakening, 15 with Hamon, 22.5 with both).

G - Nullification : Zero: GER and its user does a pose and shows off a yellow bright light. If the opponent attempts to hit them, clones will appear behind them and render them immobile, but they can use Stand Barrage. The user and GER are able to attack the opponent freely for 5 seconds while this is happening. Missing this counter results in the user being punished with end-lag.

Z - Summon Lifeform: GER barrages the ground to summon a Hawk that attacks the nearest enemy, dealing 34.9 damage.(52.3 with awakening, 43.6 with Hamon, 65.3 with both) This move doesn't work if the user is not on the ground.

X - Life Beam Of Creation: GER shoots a powerful beam using a rock at the enemy, dealing 22 damage on direct contact. (33 with awakening, 27.5 with Hamon, 41.3 with both) If the beam misses, it will summon 4 scorpions to attack the nearest enemy, with each Scorpion dealing 11.9 damage. (each scorpion deals 17.3 damage with awakening, 14.4 with Hamon, 21.6 with both)

When in Awakening Mode, Gold Experience Requiem's speed far exceeds the power of most of the stands in the game. When activated, the user temporarily gains a 50% Attack Power buff, higher base movement speed, jump height, a Defense buff as well as a 20% health regeneration boost. This also boosts your Stand's Barrage Speed. These buffs makes an Awakening GER a force to be reckoned with even when facing multiple people.

It should also be noted that the damage boost of Golden Experience Requiem's awakening exceeds that of all other awakening-type moves in the game, such as Star Platinum: The World's Combat Precision mode and Rage Mode. However, due to GER's low destructive power, other Rage and Awakening stands will generally out-damage GER in a fight, because as of the v0.88 update GER has, effectively, no reliable offensive options.

When GER's Awakening is active, the climax of il vento d'oro will begin to play.

When watching this cutscene, players are stunned for a brief time and their Stands are not summoned, even when not negating a time-related move. Return to zero negates the following moves:

Note: For Time Erase, Dimension Hop and Dimension Dip, only people who are in the dimension or erased time will witness the cutscene. All other players nearby will simply have their Stands unsummoned.

The Infinite Death Loop is a cutscene activated when someone dies to a Gold Experience Requiem during its awakening state.

Skill points needed to max out the stand : 57

Tree Manipulation: Increases the size of the tree 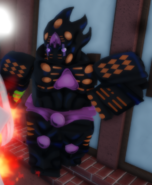 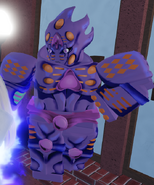