Your Bizarre Adventure Wiki
Register
Don't have an account?
Sign In
Advertisement
in: Stands, Evolved Stands, Humanoid,
and 4 more

Chariot Requiem is a Requiem Stand obtained with the Requiem Arrow, much like King Crimson Requiem, Gold Experience Requiem, Killer Queen: Bites The Dust and Star Platinum: The World. The Stand was first formed when Polnareff's Silver Chariot pricked itself against a Requiem Arrow, turning into Chariot Requiem for a brief moment. Chariot Requiem was permanently formed when Diavolo killed Polnareff in Rome, Italy, before the remaining members of Bucciarati's gang could reach him. Before Polnareff's physical death, he stabbed Silver Chariot with the arrow with the intent of never letting Diavolo obtain the arrow. Though, the community will almost always call it SCR (Silver Chariot Requiem), when really, it should be abbreviated to CR (Chariot Requiem). This could be because players feel more used to it, since that's how it had been for a long time since it was added.

In the early days, Chariot Requiem was seen as a low damage stand with a bad version of D4C: Love Train's redirection, because it was one of the first Requiem Stands to be added to the game along with Gold Experience Requiem and King Crimson Requiem. It was quickly overlooked as more powerful stands were added into the game.

Conquerer's Will is a very good move to use, as GER cannot use Return To Zero to cancel it, and unlike time stop, there is no way to resist the stun. The after-effects are also powerful, as the opponents' hitbox gets bigger in size, which leads to moves being able to hit their target more accurately.

Chariot Requiem's main appeal compared to other Requiem Stands is its viability within the Steel Ball Run gamemode, due to Conqueror's Will, which allows the user to put everyone within a radius to sleep for a period of time. This gives the user a moment to kill people while they are immobile. Pilot Mode also allows for combat with the Stand user being a safe distance away.

Chariot takes the form of man wearing an old 17th century Musketeer hat and wide boots, alongside shoulder armor and a belt with what appears to be Shark teeth. This is very hard to determine, due to it taking the form of a silhouette rather than an actual being. Although it does hold some facial features, they are shown briefly and are hard to see. In the game, if you look hard enough it is possible to see a mouth on Chariot Requiem. Its design is based on a myth of how Death appeared in dark robes to take Mozart to the afterlife before he could finish his Requiem, tying in to the fact of how Chariot Requiem is an incomplete Requiem Stand.

Shadow Atmosphere (Passive): When the stand is in Pilot, all players around the stand get slowed and their screens blurred.

LMB - Punch: This short move with a short cooldown deals 7.3 damage, can be combo'd 5 times, ultimately dealing 36.5 damage if all hit.

R - Mysterious Heavy: Sends a finisher punch, knocking back the opponent and dealing around 14.7 damage.

T - Your Own Shadow: Negates all damage actively inflicted on the Stand user back at the attacker. Damage reflected to opponents is 50% less than what it would usually be. Your Own Shadow will be deactivated if your stand is not summoned. This lasts up to 8 seconds. Though the damage for them is significantly worse, it can also deflect the beatdowns of Gold Experience and Star Platinum: The World. Although with Tusk Act 4's Infinite Rotation ability of going through deflecting moves, it cannot deflect the beatdown of Tusk Act 4. While active, the user can not pose.

Y - A Helping Hand: Makes the user run faster (slightly faster than Gold Experience Requiem's awakening.) This also gives damage reduction and jump height buffs. If you activate this near a member of your gang, then you will see chains connecting you together. This means that both of you are getting the benefits of Helping Hand.

G - Arrow Barrage: Chariot barrages the opponent with a Requiem Arrow, dealing 2.3 damage per hit. Places Stand Barrage on cooldown on use. (As of Version 1.0 the damage was increased, can someone change it from 1.3?)

Z - Pilot: Detaches the Stand from the user, allowing it to walk slowly. This ability also allows you to approach dealing damage and annoying the opponent because it is difficult to know where your true self is. It is also annoying because other players' screens are blurred and movement speed is slow significantly slowed down.

X - Chariot Run: During Pilot mode, the Stand will sprint for 3 seconds while holding X. The Stand will run in the direction the camera is facing. It has no unlock, the only requirement is having pilot.

H - Conqueror's Will: Due to the overwhelming presence of Chariot Requiem, all lifeforms (including NPCs) will fall asleep for 8 seconds (This assumes Conqueror's Will is fully upgraded.) Those affected will have 1 limb removed, and have their body parts randomized in size (Must have Soul Altercation for this to take effect.) This ability is a move that GER's Return To Zero cannot revert. It is great for initiating fights or stopping opponents from running away from you. Note that players holding block before it activates while have their blocks broken, and stunned targets will wake up early if they are ragdolled. Can not be used while Your Own Shadow is active and victims have 1 second of iFrames before waking up.

Your Own Shadow: 1 point

Using pilot during barrage is a very good way to escape combos yourself since after your barrage ends you can recall Chariot back to you, leaving your barrage unpunished.

Hitting someone with the 5th LMB in a consecutive LMB combo will wake them up if they are asleep from Conqueror's Will, be careful and wait for your combo to reset and only do 4 LMBs at a time during Conqueror's Will.

Conqueror's Will sometimes glitches and gives the opponent I-frames for the duration of Conqueror's Will. It can also knock them back irregular distances way further than it should at random, making some combos extremely annoying to pull off.

The best spec for this stand is Pluck or Boxing due to eye gouge keeping them stunned from wake up after conquerors will stopping them from blocking as well as Pluck's huge amount of Stun and Block Breaks/Bypasses preventing the enemy from doing much to counter. This is useful as you can then use Stand Barrage and Arrow Barrage out of these moves or even start a basic or complex combo.

CW can technically combo out of any move, especially stun moves, due to how nothing in the game yet has a counter to the move and it's extremely short wind-up. These combos being genuine, however, is up for you to decide. 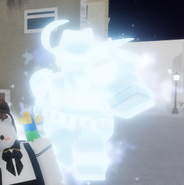