Your Bizarre Adventure Wiki
Register
Don't have an account?
Sign In
Advertisement
in: Stands, Non-Humanoid, Part 3,
and 2 more

View source
watch 02:40
World of Warcraft: Dragonflight - The Loop
Do you like this video?
Play Sound

Anubis possesses a flesh-colored body with a black head in both the colored manga and anime. Its headdress is also yellow in both media.

Anubis is a unique Stand that takes the form of a Katana and is based on the Egyptian God of Death, Anubis. In both manga and anime variants, it does not have a 'set' user, but rather possesses anyone who unsheathes it. Although, Anubis does not unsheathe for anyone, but only those it deems worthy to wield its power. Anubis can be obtained from a Mysterious Arrow with a 2% chance.

When not summoned, Anubis will be in its scabbard which is located on the user's right on the waist.

This Stand is commonly paired with Vampirism, Boxing and Sword-Style, most of which due to great combo extension, health benefits (excluding sword-style mostly specializing in combos and having no health bonuses) and overall improvement to the stand.

While Anubis' base damage and speed are slow, it's thanks to its passive ability, Supernatural Swordplay, that Anubis' M1s still find consistent use in competitive play. Supernatural Swordplay increases the speed and stun of your M1 attacks, essentially creating the entire game plan of the Stand. Curse Imbued Slice bypasses defensive buffs, similar to The World: Over Heaven and applies bleed as well as bypassing block. God of Death, or shortened to G.O.D., is an amazing move that gives Anubis' M1s and Enraged Fury attack a chance to apply poison, and if you have the Tough Spirit upgrade, it makes it so the Stand is immune to being Stand Crashed when in God of Death mode, which can make things more difficult for Stands who rely on barraging when your Stand is away (C-Moon, King Crimson). If you have it upgraded to the max duration, the cooldown is deceptively low. Afterimage applies invincibility frames and grants a speed boost depending on Skill Tree upgrades, making for a good "Get off me" option. Enraged Fury is incredibly difficult to parry, has hyper armor during the attack and is a core part of the Anubis' bread and butter combos. Finally, Cursed Blade is a unique counter that deals good damage, but is also able to counter attacks that are normally not able to be countered, such as Road Roller. Always use your counter whenever you are caught in a combo as untrue combos present spaces between each attack which gives you the chance to use your counter.

Despite all of this, Anubis still has it's flaws. To start things off, outside of God of Death, Anubis' cooldowns are long, meaning that after you perform your combos, it can be difficult to get in damage, especially when you consider the Stand's low damage and are forced to rely on God of Death's chance to give poison. Though Enraged Fury is unable to be canceled as you are attacking with it, it is cancellable upon startup, unlike the Kick Barrage moves. Finally, the lack of Time Stop Resistance and no way to actually fight back against Time Stop means that Anubis is, more often than not, helpless in the face of Time Stop Stands.

Anubis still remains a good, viable Stand within the game thanks to its unique blend of attacks, long combos and the ability to apply bleeding and poison. However, it's flaws also hold it back from being overpowered or dominant. Many players consider it solid, though not much more beyond that.

While Anubis is viable, it needs real skill to fight with and against so it's not recommended to use unless you are good at the game.

Tough Spirit (Passive): Anubis is not unsummoned when ragdolled if God of Death is active.

Supernatural Swordplay (Passive): Increases the stun and speed of M1 attacks. M1s normally have very little stun on them, so having the ability to truly chain your first four M1s together is more than appreciated. (Do note that it is best to use three M1s for combos)

E - Stand Barrage: User will perform a barrage using the sword, with each hit dealing 0.9 damage.

Y - God of Death: Anubis gains a dark, pink aura around its blade. The user's M1s, M2s, and Enraged Fury attack now have a chance to inflict unremovable poison. If upgraded, Anubis will not be unsummoned when the user is ragdolled.

G - Afterimage: The user will create several afterimages that speed around the target for a short while before disappearing. The user will become invisible and gain a speed boost when this move is active.

Z- Cursed Blade: The user goes into a defensive stance with Anubis. If hit, the user will then counter with a slice, dealing 20 damage before zooming through the assailant and sheathing Anubis, dealing another 20 damage and inflicting bleeding. It can be canceled if the user is hit in the first few frames when it is activated. This move has a cooldown of 40 seconds.

X - Enraged Fury: The user will begin slashing wildly with Anubis, dealing 2.5 damage per hit and finishing with a slice that deals 10 damage. This move acts similarly to Star Platinum or The World's Kicks.

. Since your stand can’t be unsummoned when ragdolled during god of death, use it to your advantage.
Hamon Combos: 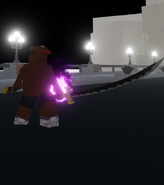 New Anubis aura that was added in the VFX update.
Community content is available under CC-BY-SA unless otherwise noted.
Advertisement